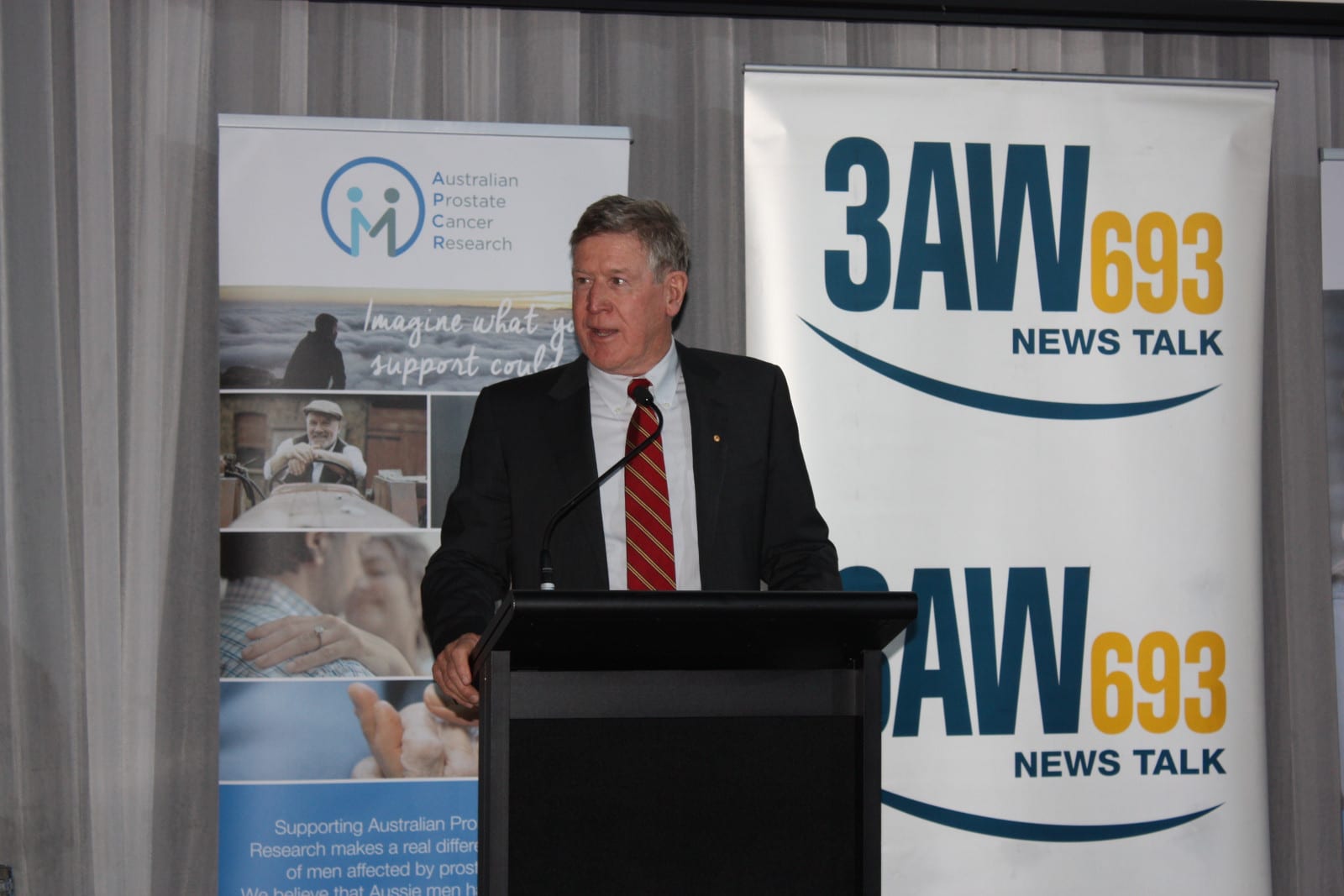 Multidisciplinary care is prostate cancer management at its best

When Paul Clayton walked into a room packed with prostate cancer specialists in Melbourne last week, he was unfazed. He took a seat at the head of the table and leaned forward, eager to hear what they would have to say about his case. His prostate had been removed nine years ago and now, at the age of 66, there were signs the cancer was back.

He’d been persuaded to get a second opinion and consulted Tony Costello, professor and head of urology at the Royal Melbourne.

Experts in their fields

While Costello is the driving force behind this group, around the table there are others who are also the top of their discipline.

Outside experts are invited too and while the discussion centres on the cases, along the way it pulls in the latest research and developments in the field.

At last Wednesday’s meeting, which The Australian Financial Review was allowed to observe, one pathologist who had just returned from an international conference described a new grading system for prostate cancer that will soon be used in parallel with the existing system and probably, eventually replace it.

Another scientist described his novel research, pending publication, which tracks the drivers of metastases in prostate cancer.

The meeting focused on advanced prostate cancer, a field that has changed dramatically in the past few years.

There used to be almost no options for men whose cancer had spread. They would go onto hormone therapy and when that failed they’d move to chemotherapy. That was it!

Now there are at least six new therapeutic options and plenty of debate about how and when to use them. And other options are being trialled.

An alternative to chemical castration

This meeting focused on men who had not yet had hormone therapy and on those who had grown resistant to it.

For men who have not yet had hormone therapy, the aim is to delay it for as long as possible.

“We think it is a terrible thing to do to men,” said Costello.

Hormone therapy is chemical ­castration. It turns off male hormones and impacts profoundly on men’s quality of life. Not only does it have unkind side effects, it can cause health complications and has been linked to fatal cardiac events.

There is also an emerging concern that once it stops being effective, it can turn around and start promoting cancer growth. For some men, it is too big a weapon to use early.

These men were just beginning to get secondary spots of cancer in their nodes and bones. Those with five or fewer spots, who met a number of other criteria too, were eligible to enter a trial of this therapy.

But how could anyone know just how many metastatic spots they had?

When this PET scan is combined with other forms of scanning, the spots are highly visible on a screen. They glow.

Once identified, the spots are destroyed with precisely targeted, intense radiation. It’s like a spot welding.

Costello noted that at the previous meeting, an expert from New York had described this therapy in men who had five or less spots, as “a possible second chance of potential cure” and ­certainly as a means of delaying hormone therapy.

“Personally I don’t think it is curative but I do think it can alter the course of the disease,” Costello said.

Spot welding represents a hypothesis shift in prostate cancer. “It was previously thought that when the cancer returned, it was systemic so there would be no point targeting these lesions, “ says Declan Murphy, associate professor at Melbourne’s Peter MacCallum Cancer Centre.

“But now we think there is a subset of men with just a few metastases who may not have rapidly progressive systemic cancer.”

ENCOURAGED BY DEBATE
In the room everyone had brief case summaries of the patients. Pathology slides and scans appeared on a large screen for all to see.

The first two patients, both 59, declined to be present. Clayton was third. He came alone.

As his scans went up on the screen, rigorous technical debate ensued. There was disagreement about what the images meant and what should be done about them.

The issues were described in detail to Clayton, as were the options along with their potential side effects. When asked intimate questions, he answered frankly.

Eventually a consensus was reached.

But Clayton had something on his mind. After he was diagnosed, he’d waited about 10 weeks before having surgery.

He’d always worried the wait had disadvantaged him. They ­reassured him it would have made no difference then and would not now either.

Later, Clayton told the Financial Review he responded to the energy in the room and was encouraged by the live debate.

As an engineer, the technicalities didn’t throw him and neither did the setting. He’s accustomed to walking into a full conference room and participating. Pleasantly surprised by the ­concentration of expertise, he could sense the synergy and felt that if things could be resolved, this is where it would likely happen.

As his father had lived to 101, as he had just rowed nine kilometres along the Yarra, he was optimistic.

When he left, Murphy noted how valuable and efficient it was to have patients present. It was easy for a solution to emerge from a high-level meeting then be conveyed to a patient, only to find it didn’t suit him because of his personal circumstances.

RECOGNISING THE PROBLEM
Murphy then presented the next patient, also 68, who came with his wife from Canberra. They preferred their names not be used but disclosed he was a retired language and history teacher and she had been a health bureaucrat.

For him, the meeting was initially intimidating, with unintelligible images on the screen and many people of unknown expertise around the table. “But as they started to talk, I began to recognise my own problem and understood who was who and what the different options were,” he said.

As he had other health issues, it was noted that his other specialists should be involved in the decision making.

This man’s case was complicated by a recent blood cancer and before they left, his wife asked an incisive question.

She pointed to the possibility that his blood cancer was linked to the prostate radiation he’d had some years earlier. It was well controlled now but would further radiation reactivate it or another form of blood cancer?

It was a tough question.

“I didn’t expect a definitive answer,” she said later.

“It’s very early days and we may be caught in the interface between differing technologies but what we are looking for is a willingness to engage in teasing out what is known about the risks and the probabilities.”